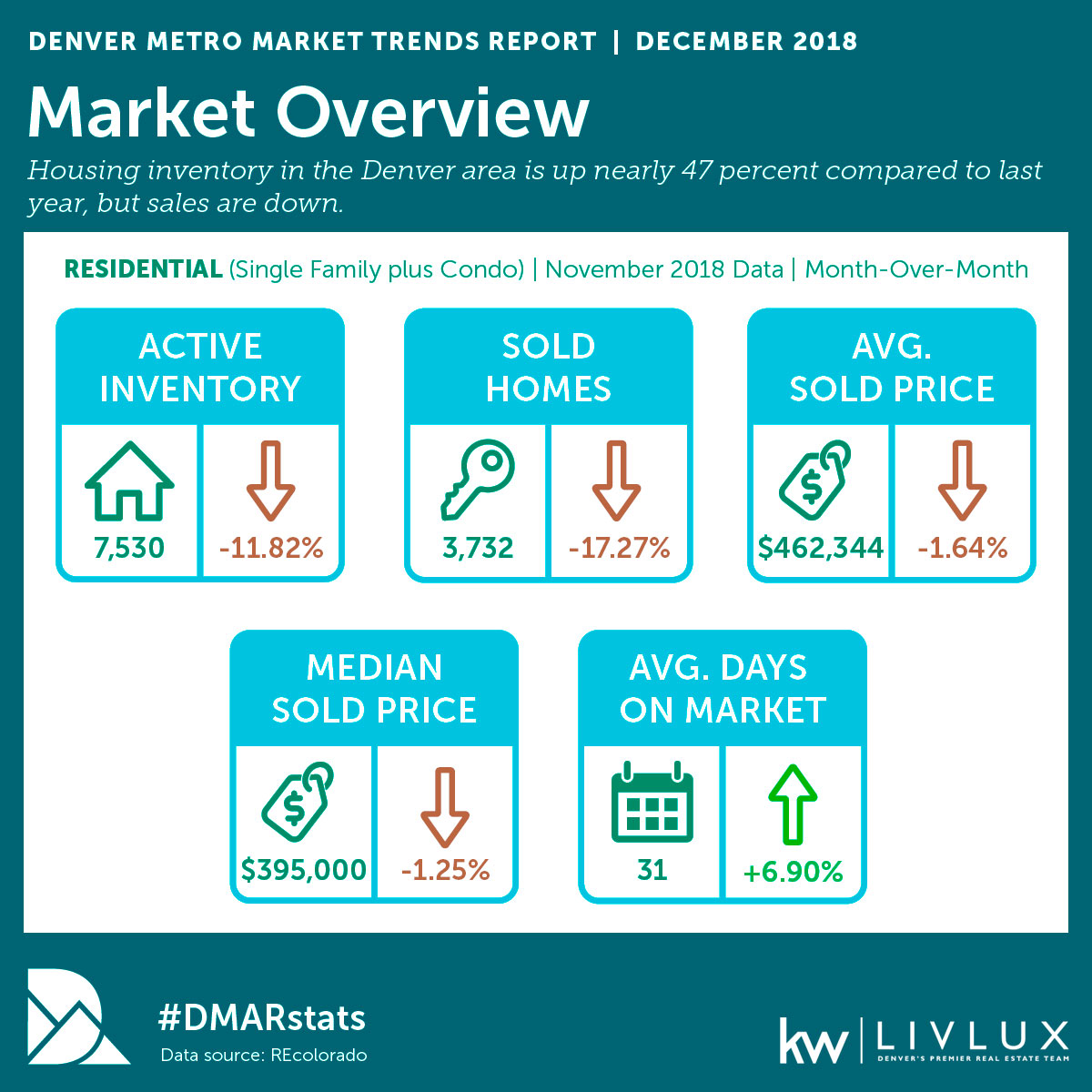 Quick look at City and County Market Trends Reports featuring December data. These 48 downloadable reports are comprehensive and a fantastic member benefit. Download all the reports with one click below.

Despite what feels like a major market shift, home sellers in Metro Denver are still in control in all housing price ranges, except homes priced over $1 million where homebuyers and sellers are on equal footing.

“Sellers celebrated in the first half of the year with a crazy blur of multiple offers and fast sales,” said Jill Schafer, Chair of the DMAR Market Trends Committee and Metro Denver REALTOR®. “It was buyers’ turn to celebrate when the housing inventory jumped up in May and June, causing a market adjustment in the second half of the year and finally giving them some choices.”

With more competition, many home sellers had to make price reductions for the first time in years according to Schafer. She shares, “With sales down and inventory up, it might not make a lot of sense for home prices to be up, but they continued to rise.”

The average price for a single-family home in 2018 was $522,839, up 8.05 percent in a year. The average price of a condo increased 9.82 percent, ending 2018 at $351,677. Home prices continue to rise in large part because people continue to move to the Denver area. According to the US Census Bureau, 80,000 people moved to Colorado from mid-2017 to mid-2018. Schafer adds that Millennials are pouring into the real estate scene as first-time homebuyers adding to the demand.

Notably, sales volume in the entire residential market hit a high too in 2018 at $26.5 billion, up 2.36 percent compared to the year prior.

In the single-family Luxury Market, 112 homes sold during the month of December, down slightly from 115 in November and 118 year over year. According to Levinson, “The good news is that the average days on market for luxury homes dipped slightly to 72 in December from 74 days in November and 110 year over year. Close-price to list-price was also up, just shy of two percent from December of 2017.”

Meanwhile, the luxury condo market held strong with 16 units sales in December, which is on target with the 16 units that sold in November and in December of 2017. Notably, the days on market in the condo sector dropped over 55 percent to 54 days in December from 121 days in both the month prior and December of 2017. Alternatively, from the single-family market, the condo segment saw a dip of just over one percent of the close-price to list-price ratio.

Thank you for contacting us, we'll get back to you shortly.

Sorry, we are unable to send your message at the moment. Please try again later.